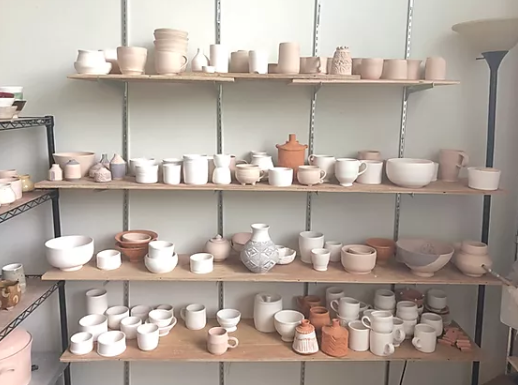 In one year’s time, his business grew so quickly that he had to relocate to a larger space in order to serve his growing membership base. “I was full and couldn’t take any more people,” recalled Sean. It’s the type of problem a small business owner dreams of having, but the four month waiting list wasn’t reflecting the relaxed studio vibe he wanted to convey to potential new patrons; he knew it was time to move.

“We coincidentally found this place really, really fast,” said Sean of their new location one block from their original headquarters in Queen Anne. “And this place was a really good deal.” The new location not only provides more space for new members, affordable rent allows Sean the opportunity to creatively test out his store without having to worry how every “square foot is going to pay for itself.”

“We have such a good community right here,” added Sean who wants to maintain a membership base of 100 potters. And their loyalty was on full display last fall when members rallied together and moved every ounce of clay and equipment in just one weekend. “It doesn’t matter how much space you have, when you have more than 100 people you lose that sense of community. So I want to open a second studio eventually, probably like Madison Park area so that people who live on Mercer Island don’t have to travel all this way.”

When he moved to Seattle, Sean couldn’t find a pottery studio that was solely centered on the customer experience and was not just the ancillary business of a professional artist. “A lot of potters teach to support their studios,” he said. “I’m kind of the opposite. I do art as a pastime, but I really like teaching and meeting everyone here and supporting the studio.” Sean discovered the need for a community-centered studio, so he applied for a loan. He was accepted, then opened Sean’s Clay Corner. “I have the advantage of getting to know my customers really well. They get to tell me what they want, so I can adapt to what they’re interested in the most.”

This patron-centered model has clearly benefited his bottom line, so we asked if he had any words of advice for aspiring entrepreneurs. Sean encourages small business owners to get to know what the customer wants and to keep testing new ideas. “Sometimes you just have to keep going. Just because something didn’t work, doesn’t mean that it wasn’t necessary.” One of the benefits of being an entrepreneur Sean said is, “You feel a lot more confident in the decisions you’re making which helps in life so that you have a direction.”

Along his entrepreneurial journey, Sean found himself at Business Impact NW, where he received services from our technical assistance and lending departments

Sean graduated from Grow & Thrive in December, the structured mentor program for established small business owners. At Grow & Thrive he was able to find a community who was excited to talk to him about his business. “Sometimes your friends stop wanting to talk about your business forever,” he laughed.

Sean has also received two loans from Business Impact NW – one to purchase equipment and the second to help with his move and expansion.  “It’s a great organization,” he concluded. “It still feels like everyone there cares.”