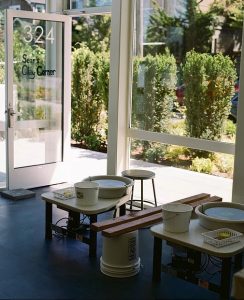 Sean Kelly opened his business a few months ago and so far everything is going well. He started out teaching pottery classes and has since expanded to selling his pottery as well. The classes have been popular thanks to flexible scheduling and being open to every skill level. Sean says he is a very artsy person, and has a variety of artistic hobbies but is most passionate about ceramics. He likes pottery because it allows you to incorporate painting, design and hands-on skills into one practice. He’s very detailed which has not only helped him with his pottery but also with running the business.

The small classes are the most unique thing about this business. No more than 6 people participate in each class which allows Sean to really spend a lot of time with each person and the students to really get to know each other. He has a hands-on approach to teaching and learned from experience this wouldn’t be possible with larger classes. When he was in college, there were 15 people in a class and Sean felt like he didn’t have a lot of focus from the professor. He notes that the students at Sean’s Clay Corner are learning faster in smaller classes and everyone looks forward to seeing each other every week.

In the beginning it was sometimes hard to get people interested, but it’s definitely changed as he’s been up and running. According to his website, all classes are currently full with new classes starting soon! Facebook has been really helpful since a lot of people share their experiences and pottery with their networks there. Students always text him that they know someone who is interested and refer their friends that way too. The fact that people have so much fun in the classes and they build relationships with each other there has made for a great word of mouth marketing campaign. When he was originally interviewed, Sean was hoping to begin selling his pottery as well as teaching classes. Since then, we are happy to see he’s made that a reality with a retail section on his website featuring current work and custom orders.

The studio is strategically located in Queen Anne. This area was chosen intentionally for a few reasons. It is right next to Fremont, which boasts a very supportive artistic community. It’s also near South Lake Union which allows him to easily cater to tech workers looking for ways to de-stress creatively. This demographic also tends to have the kind of disposable income that is key to Sean’s Clay Corner’s growth. The search for the studio wasn’t easy, but it’s truly one of a kind. The tall ceilings and big windows are perfect for a studio, there’s a lot of natural light. Sean says when he saw the space he knew it was the perfect fit and calls it “inspiring”. In addition to teaching both private and small group classes and selling his own pottery, the space is available to other artists to rent studio time for their own projects.

Sean got to know about Business Impact NW when he applied for a loan at Verity Credit Union. They don’t do small business loans but since they’re partners with Business Impact NW they referred him to us. Once here, Roland Chaiton was Sean’s mentor during the loan application process and helped him get the loan he was looking for. Roland was able to walk through the requirements and organize the numbers in a way that made sense and showed the business would be profitable. Sean used most of the loan money to buy necessary equipment like pottery wheels and a kiln and to rent the beautiful space that has been essential for his success.

Sean wants to be successful enough to one day hire other people to teach the classes so he can concentrate on managing and work on other things. Finding the right people is difficult since the classes are dependent on his unique teaching style but he thinks the best way to train them is by teaching them himself. His dream is to eventually be able to open a studio in France. He has his work cut out for him to find employees as passionate and talented as he is, we look forward to following his next steps.