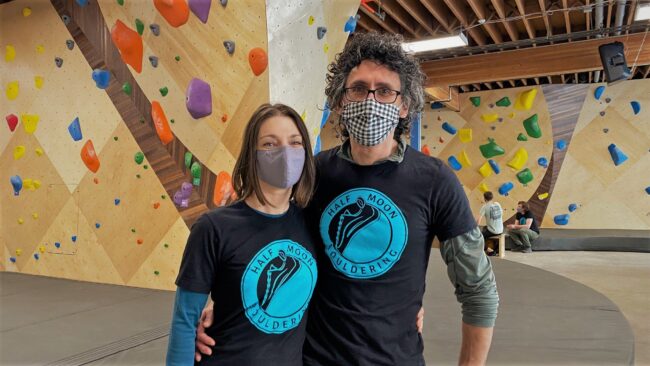 Nestled in Greenwood is a new 11,000sq ft attraction - Northwest Seattle’s first climbing gym. The massive endeavor is the work of power couple and new parents, Gloria and Daniel Man, who faced a global pandemic alongside endless obstacles to accomplish this feat.

Childhood sweethearts Gloria and Daniel grew up in Eastern Europe, during the tension and the fall of the Iron Curtain. In search of a place to build their lives together, they emigrated in the 2000s to the U.S., landed in Seattle, and fell in love with the people and culture. Two decades later, the couple was deep in the climbing culture of the city - climbing through all the gyms that congregated in the south. “We had such a heavy commute, there were no climbing gyms in [our neighborhood]”. Knowing the traffic that ensued at the end of the workday, the couple found themselves straying away from their beloved sport.

There was a reason for the lack of bouldering gyms in that area; “There is no space, the market is so busy...” mentioned Gloria. What seemed like a near-impossible undertaking, Gloria and Daniel knew they had to grow their passion into a business and establish a bouldering gym in the neighborhood.

From business-building events to loan inquiries, alongside pure perseverance, the years passed. It became increasingly difficult to build their business. Gloria and Daniel knew they needed to take a loan out to make their dream a reality, “We had all the anxieties about lending, people told us it would take years...they told us to brace ourselves because it won’t happen.” Gloria and Daniel went on to face difficulties and rejection for years, with challenges from finding space to finding a lender that would take on their vision. “We have this saying where I’m from - ‘every kick in the butt moves you forward.’” said Gloria as she reflected on the journey, "Though it was a tedious process, there wasn't ever a time when the roadblocks we faced seemed insurmountable, and we have to give credit to all the kindness of the people with whom we worked."

A hint of hope was given to Gloria and Daniel from Homestreet Bank when they referred them to Business Impact NW. Gloria and Daniel were finally approved for the lending they needed to build their business. “[We] blazed through the application process, it went so smoothly, and the people really made it the best,” stated Gloria. With their loan approved, the couple signed their lease for the 11,000sq foot space in December 2019.

Going to the Moon

One tough element to consider in their vision was naming their business. They circled usual rock climbing names, but Daniel at one point noted that "it felt like we were reaching for the moon with our plans, but even if we got halfway to the moon, it wouldn't be too shabby." Half Moon Bouldering was born. 'Half' for the compromises they were ready to make for their project to launch.

After leasing their location, the excitement and pressure mounted to launch their vision. Then, just three months later, COVID-19 hit Seattle - shutting down their project. With a series of delayed opening dates and a new host of restrictions and guidelines for gyms, Gloria and Daniel finally opened their doors on March 13th, 2021. “The people around us, in our lives, have all worked so hard to make things better and help,” stated Gloria. She remained positive throughout the process and noted that one of the best parts of finally opening was creating jobs for those that had lost their jobs during the pandemic.


The gym is an open and welcoming environment, with areas for all ages, abilities, and climbing experience levels. Gloria and Daniel are also dedicated to giving back to their community, currently working to give local underserved families the opportunity to dive into the sport free of charge. They hope their small business can continue to make a big impact in their community by partnering with schools, nonprofits, and other organizations in the future.

Osmir "Oz" Díaz is the Communications Manager at Business Impact NW,
dedicated to amplifying the work of diverse entrepreneurs online and offline.

Oz holds a variety of skills in digital marketing that she applies to her work for racial equity and social justice in the digital landscape.