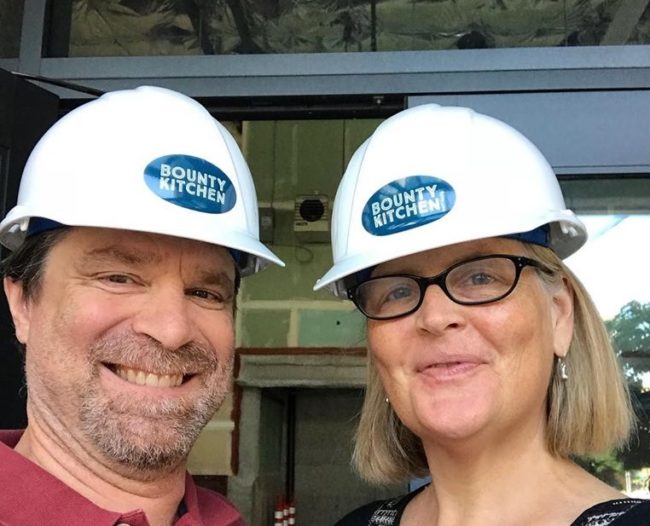 While the autonomy that comes with running your own business can be highly rewarding, it is also well known that being your own boss can be incredibly demanding and requires much more of you than clocking into a nine to five. That did not scare Meg Trainer and her husband Russ Raade from opening up a second location of Bounty Kitchen, the healthy eating café that became wildly successful upon their launch in Queen Anne in 2015. While Bounty Kitchen’s younger sibling just opened its doors in the Denny Triangle last month, this dream has been long in the making.

Nine years ago, when the effects of the recession were still being fully felt, the security of Meg’s professional career, like so 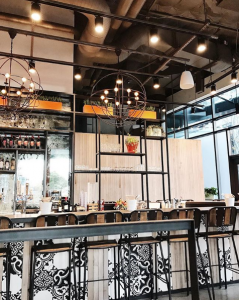 many others, felt suddenly unstable. “I was really lost,” reflects Meg. “I had a little bit of money saved, like a little, and I was kind of living off fumes. I was just in a bad place and I was like ‘I can’t spiral downwards.’ So I ended up taking some of the money, and I had done some research and found this class.” The class Meg discovered was Launch & Grow, Business Impact NW’s 7-week comprehensive training series where burgeoning entrepreneurs transform ideas written on a napkin into fully-fledged business plans.  “Launch & Grow had a profound impact on my life because I was one of the people in 2008, 2009 that got kind of like spun out of their career with the economic downturn. And I always had this dream of opening my own café… So I took a class to fill my days and put myself in a project so I wouldn’t get spun out.”

When Meg left the class she had the tools to start her own business, but being so soon after the recession, the timing was not right to kick start her café dreams. Still, Meg’s Launch & Grow experience produced immediate results. “I think mindset-wise it was the thing that shook me loose. I ended up getting a really good job at the end of the class with Whole Foods Market which ended up being the most incredible part of my career ever,” says Meg. “And Whole Foods boomed during the economic downturn… People who had some money to spend, they traded up… You may not be going out to eat at your fancy restaurant like you used to, but you’re going to go buy your organic treats at Whole Foods Market.” So for the meantime, she put her business plan on the shelf, “but I didn’t put the dream on the shelf.”

Working as a representative of Whole Food’s healthy eating initiative, Meg discovered “there was a hole in the market of healthy eating that was not rabbit food.” Then in 2015, six years after she enrolled in Launch & Grow, Meg dusted offer her business plan and got to work. “When I took the business plan off the shelf it was solid. All I had to do was change a couple of key pieces of the plan. Nothing really changed except from a traditional café to a more healthy eating café. That was it. And when I looked at the work a few years after, I was like damn, this is a good body of work. Like this is a starting place,” states Meg.

She had a pulse on the demand for a healthy eating establishment and Bounty Kitchen became an overnight success. “We had $9,000 of profit in six months, which was unheard of. So we finished 2015, our first year profitable and then we blew up in 2016.”

All those years later, Meg still followed Business Impact NW and when she received a newsletter from Business Impact NW’s Executive Director, Joe Sky-Tucker one day, she replied with the news of her thriving new business. “I was able to say ‘I have a really successful business,’” smiles Meg proudly. Joe emailed back saying that he loved her story. They met for coffee and Meg was brought back into the Business Impact NW fold, becoming a mentor to new entrepreneurs, and helping advise BIN in the creation of Launch & Grow’s follow up class, Grow & Thrive.

Now less than four years after becoming a community staple in Queen Anne, Bounty Kitchen is helping create community in 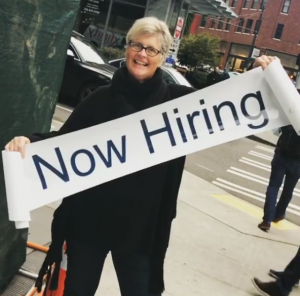 the rapidly developing Denny Triangle neighborhood. “There’s this residential neighborhood forming with no identity and there’s no real community based business that’s here servicing or helping with that identity,” states Meg. Bounty Kitchen helps fill that void. “Here I feel like we can come into a neighborhood that’s just emerging but with no community center… So be a community connecter for an emerging neighborhood, not an established neighborhood. That’s probably the thing I’m most excited about. And we’ll do that by activating the weekend. Like you know, all these people scatter to the other neighborhoods for their weekend needs: brunch, cocktails, sitting on a cool patio in the summer, so we’re hoping to have people stay… I really want people to come and meet with people… enjoy their lunch and sit down and stay awhile.”

Backed by a community of regulars and “super regulars,” many of whom live in Bounty Kitchen’s original home of Queen Anne and work in the Denny Triangle, Bounty Kitchen embarks on their next venture with energy and enthusiasm that can’t help but inspire.

“A ship is safe in the harbor, but that’s not what ships are built for,” a John Shed quote Meg shares that perfectly complements her ambition.  To anyone looking to start their own business, take Meg’s advice, “You have to be self-motivated, and you have to be a self-starter, and you have to be able pick yourself up by your own boot straps when the going gets tough.”

Visit Meg and her new team at Bounty Kitchen’s second location in Denny Triangle at 801 Lenora St. and follow their journey on Facebook and Instagram. You can also find Bounty Kitchen on our Small Business, Big Impact Shop Local map.

Megan is Business Impact NW's Development Coordinator and a candidate for Seattle University's Arts Leadership MFA program. She holds a BA in English with an emphasis in creative writing from the University of Montana and is passionate about storytelling of all forms, nature and developing community by elevating our unique stories. Megan grew up on her family's farm and ranch in Montana and is especially inspired to empower small business owners from underserved rural and urban communities.