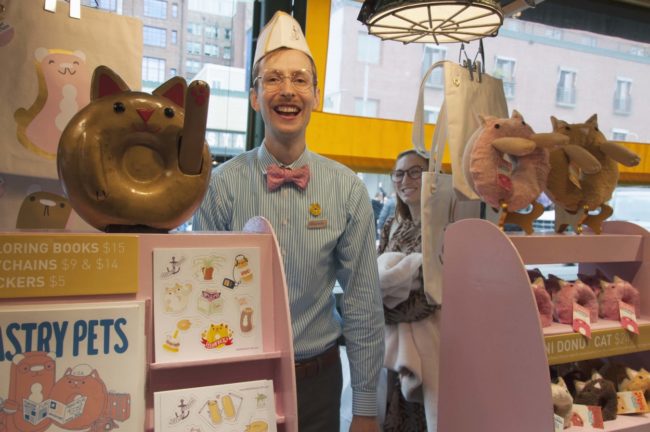 As people prepare for the holiday season, Skye Saylor and Thomas Marnin are busy filling orders and stitching together toys for their buzzing business MarninSaylor, featured recently in Seattle Magazine and Eater Seattle’s holiday gift guides. “We’re always making toys. We’re always thinking of the business,” says Thomas who persuaded Skye more than five years ago that her donut cat idea, now a founding member of the Pastry Pets™ family, was one worth pursuing. “Skye came up with the donut cat based on a little pencil sketch that she did of two of her favorite things combined,” remembers Thomas. Shortly thereafter their friends began reaching out to Skye to make more donut cats so they could give them as gifts. Then Thomas stepped in to help fill orders, and the rest, as they say, was history. “Shortly thereafter the mini donut cat came out.”

The founding duo fell in love on a long walk from Seattle to San Francisco. Newly liberated from the burdens of student loans and corporate work life, “we decided we were going to take a giant adventure together so we walked from here to San Francisco,” reflects Thomas. “And that was actually where our logo came from.” When they returned home from California, a half-finished donut cat greeted them. With a background in graphic design and lifelong commitment to creativity, Skye slowly took to the idea of molding her craftsmanship ideals into a business. “I was really skeptical. It just didn’t seem like a real thing that you could make a business out of… and here we are like 7,000 mini donut cats deep still makin’ em.”

Initially the founders thought they would create a new line of toys each season and that Pastry Pets™ would be one line among many, but the series took off and they’ve been trying to catch up ever since. “I really want to focus on releasing things more frequently which is something that kind of felt like it fell by the wayside over the last couple of years because we’ve just been so busy trying to figure out how to do this,” says Skye.

“Honestly I think expectations are tempered through doing something like this. I remember when we were first starting out I had like really grand expectations for very short periods of time,” adds Thomas. “Over the years of launching toys I’ve learned to just focus on the process and not worry as much about the outcome.”

“Before we had all these goals and these nebulous plans and they were all in our heads and we knew we wanted to get there, but we didn’t really have step by step sort of plans to achieve them…Try it and see what happens works to a point, but just being able to sit down and focus on what’s important – make a list of the most important goals for us right now and actually plan for them – has been really helpful,” reflects Skye, who began working with Business Impact NW through Grow & Thrive, an immersive mentorship program for existing small businesses through the Washington Women’s Business Center. “The reason that I decided to take this class is because our business is on this weird middle ground right now where you know, we’ve been around for like five years, so we’re past the scary, probably going to tank stage – like most likely, we’re probably not going to – but we’re still not thriving. We just need to figure out ways to take what we have and make it work harder for us so that we don’t have to work quiet as hard.” Raised in the Rocky Mountain West, it’s apparent that at their core both Skye and Thomas are extremely hard working, salt of the earth creatives. “It’s not really about the idea. It’s just about consistent hard work every single day. Like, waking up the next morning and still being willing to do it even if the day before was hard.”

Fellow toy maker and studio suitemate, Kelice of Careful it Bites, the Seattle maker community at large and Pike Place Market have also played an integral role in MarninSaylor’s success. “The market administration definitely wants good things for us and it’s nice to know that they’re behind us,” remarks Skye. With a nonexistent marketing budget, the market’s 10 to 13 million visitors a year comes in handy. Pike Place is the 33rd most visited destination in the world. Not only does it put them in front of millions of potential fans, it also provides them a platform to educate customers on their unique product. “For us it’s such a specific item, like you have to tell people what it is – it’s not a pet toy, it’s not a whatever – it’s just a toy. You have to tell people why it costs this much. Explain that we make it, you know, so we’ve never hired anyone to sell for us because it’s such a hard sell,” says Thomas. He adds that kids understand the donut cat idea immediately, but parents are often suspicious of the price point. Since toys were one of the first products to be manufactured overseas, MarninSaylor must educate customers on the making process and convey the value of handcrafted goods to those used to buying their toys at Target or Amazon. “The object itself is one aspect and then how it’s made is this whole other story. If you can connect to that on a deeper level, it adds this kind of spiritual value to the object,” he concludes.

With the New Year on their heels, Thomas and Skye are excited for what’s in store for 2019 and hope to someday open their own brick and mortar. “2018 has been the year of tightening up the ship. It’s been stressful, but it’s been good,” says Skye “We’re looking forward to next year because we feel like we’re going to have a lot of great systems already in place.”

If you’re looking for the perfect stocking stuffer, or are planning a trip to Pike Place over the holidays, stop and say hi to Thomas and Skye. Donut cats and the other Pastry Pets™ can also be “adopted” online at www.marninsaylor.com. Be sure to follow MarninSaylor on Instagram @MarninSaylor and Facebook @MarninSaylor.

For entrepreneurs interested in finding out more about Grow & Thrive, the structured mentorship program perfect for business owners who want to take their business to the next level, visit: businessimpactnw.org/growthrive.