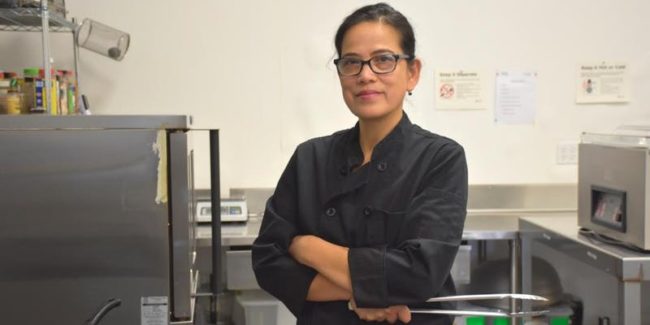 Cristy McFall was born into a big family in a small village in the Philippines. As one of six children, and the only daughter, she was no stranger to hard work growing up. She immigrated to the U.S. and started a family with Jim McFall on Camano Island, Washington. Eventually she found herself looking for a way to earn extra money to support her children’s future college education plans.

In 2013 Cristy McFall began selling frozen lumpia — a traditional Filipino food very similar to an eggroll—through the Facebook market app with the technical help of her social media-savvy-son. Her lumpia was a huge hit. Eventually she expanded her offerings to full-service catering while continuing to sell batches of frozen lumpia. After a few years of working out of their home and through rented commercial kitchen space, the McFalls made the decision to “go all in” to the business and used Jim McFall’s 401K retirement account to lease a commercial property, buy equipment and make leasehold improvements. They leased a space on Camano Island and build it out with a USDA-grade commercial kitchen and tasting space and Cristy’s Lumpia was born.

Shortly after opening their new location with new demand pouring in from the local community and beyond, Cristy McFall recognized a need for working capital to hire employees to meet the demand, but found that traditional lenders weren’t willing to take a risk on their rural food business startup.

Cristy McFall was referred to Business Impact Northwest, an SBA microlender which funds small businesses in amounts smaller than traditional banks typically do. Cristy McFall was approved for her first microloan in the amount of $60,000 in February 2018. A few months later she applied and was approved for a second microloan of $15,000 in August 2018, and then again in December 2018 for another $10,000.

The first $60,000 microloan allowed Cristy McFall to hire two people and purchase a delivery van. The second microloan allowed her to consolidate high interest debt and hire another employee. The most recent loan enabled her to buy equipment and hire another catering manager. Cristy’s Lumpia went from annual revenues of $120,000 to $275,000—effectively doubling the business over the course of a year. More importantly to the McFalls, they were able to create seven new part-time jobs on Camano Island.

Cristy McFall said, “America is the land of opportunity”. “I came from a very poor family. My father was a man of few words, but the minute he opened his mouth, everyone listened. He said ‘Listen kids, I’m going to say this one time – it is not your fault that you were born poor, but if you die poor, then it’s your fault. You have to work hard’.”