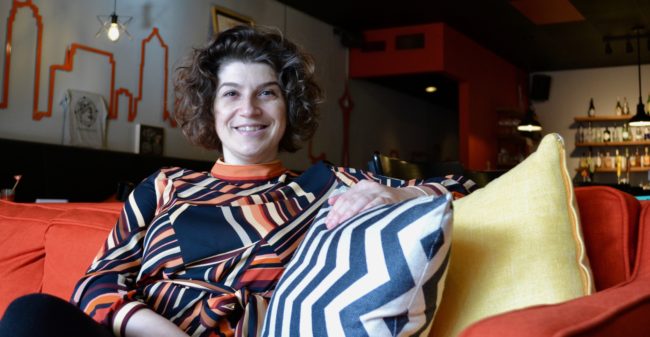 This December we are thrilled to highlight Iulia Bejan, owner of Connect Lounge Seattle, through a three-part small business story series! Connect Lounge, is an immigrant-owned “social bar” in Seattle’s Belltown neighborhood that prioritizes human connection through conversation. In this first story we will explore the origin story of Connect Lounge and Iulia’s journey to entrepreneurship.

Iulia Bejan moved to the U.S. from Italy in 2007 to get her MBA at the University of Rochester in New York. Originally from Romania, Iulia had a career in marketing and business development in the shipping industry. Then her desire to open her own business and work more closely with people led her to the U.S. “One thing that’s always stayed with me throughout my career is this curiosity and love of different cultures and people,” Iulia reflected.

The idea to work for herself also stems from her entrepreneurial roots. “My dad was probably the most ambitious person I knew outside of myself… He came from poor beginnings and was not only smart, but driven and was able to build something. My mom is a doctor and has her own practice.” She said she saw the entrepreneurial spirit in her family, but at the same time, she said “I have this desire in me that I can’t explain. It’s a desire to create and a desire to be free. The desire to be free is basically when you’re doing something that you want to do, and you don’t feel constrained by somebody who maybe has more power than you. So I think that on some level I’m uncomfortable being told what to do.”

She said her story as an entrepreneur is twofold. “It comes from something I’ve seen in my family and something that is inside of me…I want to be productive and do something for people.”

Iulia has passion for people and drive to work on her own. This led her to trade in the business to business sector, and eventually to the business to consumer world. “Leaving the corporate world to come to the U.S. for two years was the first big risk I ever took in my life,” she said. “Financially I had to make sacrifices. I went from being extremely successful financially, to not making any money for two years. I went back to being a student and I learned how it is to live on a budget again.”

In 2010, after completing her MBA, Iulia moved to Seattle. It was a difficult time for anyone to look for a job, but especially for an immigrant. Her job search lasted eight months. Although the experience was tough, Iulia said it served her when she began laying the foundation to open her own business. “In itself that was kind of an entrepreneurship experience. I had to figure out how to sell myself and sell my skills to get a job in a country I had never worked before. I was also a student and needed someone to hire me on a work visa,” she added.

During her first spring in Seattle, Iulia started a job at Amazon. She worked for nearly five years, but she always had the seed of a small business idea in the back of her mind. Iulia sat down and wrote a list of what brings her joy and another list of her skills. The combination of those two lists resulted in the idea for a “social bar.” At the beginning of every year she also lists out what she wants to do before she dies. The number one thing that kept coming up was “own my own little social bar.”

When Iulia got her green card in 2015, she knew it was time to take the leap and start seriously working towards her dream of owning her own business. Iulia quit working for Amazon that summer, went to Bartending School and took a part-time job as a bartender. She began drafting a business plan and defining the concept of a social bar where “food and drinks are just compliments,” to “humanity and good people.”

Stay tuned for next week’s second installation of Iulia’s small business story for a behind the scenes look at Connect Lounge’s launch. Also on how Iulia was introduced to Business Impact NW!