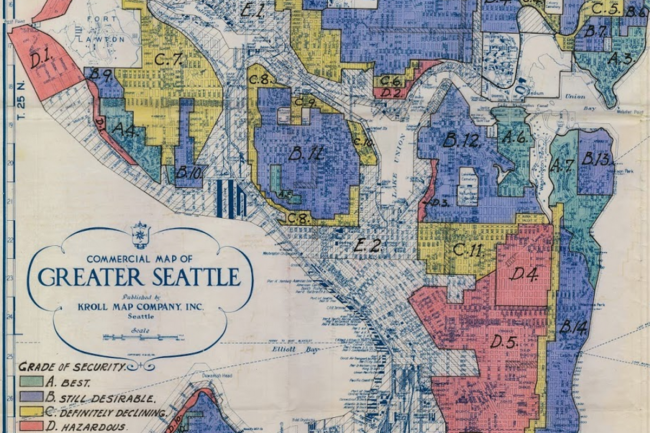 The issue of discrimination in lending is complex and systemic

Whether occurring overtly or otherwise, it is a hindrance to small business owners and adversely impacts communities. “This goes back a ways and it’s not just lending,” says Business Impact NW, SVP and Senior Loan Officer, Roland Chaiton.

The Equal Credit Opportunity Act of 1974 was established to protect borrowers against discrimination due to “race, color, religion, national origin, sex, marital status, age, or because you get public assistance.” Yet it still occurs. A report released by Stanford University’s Graduate School of Business this January found that despite the recent “explosive growth” of Latino-owned businesses, “only 28% of Latino business owners receive the full funding amount they apply for, compared to 49% of white business owners” (MarketWatch).

Similarly, the Fair Housing Act of 1968 was established to prevent discrimination in the buying and renting of homes. However today Latino, African American and other minority communities are twice as likely to have their home loan application denied (WUNC). An article published by the Chicago Tribune just last year titled, Modern-day redlining: How banks block people of color from homeownership, reported “proprietary credit score algorithms to have a discriminatory impact on borrowers of color” (Chicago Tribune).

So if systems are in place to protect individuals against discrimination, why does it still occur?

When applying for capital to buy a house or start a business, lenders have to have a system in place to determine whether a borrower qualifies and to protect their investment. “Since we are providing a financial product, unfortunately we have to evaluate clients based on financial metrics,” says Business Impact NW’s Chief Lending Officer Sunil Nair. Among the criteria considered, include the borrower’s credit history, along with their debt-to-income ratio, or their assets and liabilities. Loan rates and fees may compensate for a higher risk loan, but the reason a client may have less liquid assets to begin with, is often systemic.

For communities who have been historically disenfranchised, barriers to capital are exacerbated by generational wealth

Consider a borrower whose parent or grandparent was unable to access a loan because they were new to the country and couldn’t find a co-signer, or they lived in a district that was “redlined” and banks were not allowed or advised against lending there. This parent or grandparent had less of an opportunity to build wealth, leaving fewer assets (lower net worth, ownership of property, liquidity, etc.) to their children and grandchildren than someone who was able to acquire a loan, buy a house and start a business.

“Rampant foreclosures had left lenders fearful and so the federal government devised a solution. It would encourage banks to get back into the business of loaning money to would-be homebuyers by developing maps that would show where their mortgages were most likely, and least likely to be paid in full. It was called ‘redlining’ and the aim was economic development. The result was economic discrimination” (KCTS9).

“People in the Central District, they couldn’t get home mortgages. They couldn’t get loans. The zones were actually depicted on maps. It was pure, outright discrimination going on,” states Chaiton. Lenders in the City of Seattle practiced redlining until June of 1977. (Seattle.gov, KingCounty.gov). KCTS reports that people who grew up in neighborhoods historically redlined in the decade following its demise, earn less money today than individuals who grew in neighborhoods “marked in blue.” (Interested in learning more about the historical implications of “redlining?” Read the Washington Post’s, Redlining was banned 50 years ago. It’s still hurting minorities today.)

According to an article from the Brookings Institution published in the early 2000s, “Community Development Financial Institutions (CDFIs) as we know them took root approximately 25 years ago in the fertile soil of bank redlining, the Community Reinvestment Act (CRA), and the federal government’s shift away from its short-lived Great Society strategy.” CDFIs were established to provide microlending to marginalized entrepreneurs and because they have a mission to uphold, they are better equipped to provide loans to those historically disenfranchised and take on more risks than a traditional bank.

At the time its dba was Community Capital Development and it was established to assist the community’s marginalized entrepreneurs. “The founder made a place where they could come and they were not going to get discriminated against. He made sure of that with the staff,” recalls Chaiton. Continuing in Thomas’s legacy, Business Impact NW, SEDF’s current dba, provides race and gender training for its staff and works tirelessly to uphold its mission to “grow businesses that create jobs in underserved communities.” Chaiton adds, “It has a history of being an organization that will not tolerate discrimination.”

If a borrower has been turned down by a bank because of circumstantial credit issues, a poor credit score, or lack of liquid assets, the worst outcome is that they fall trap to predatory lending (learn more about the risks of predatory lending in this blog series by Business Impact NW). Applying for a loan through a CDFI is the best alternative, especially for borrowers who have experienced discrimination, or the historical ramifications of discrimination. (The FDIC identifies three types of lending discrimination: overt discrimination, disparate treatment and disparate impact.)

Loans approved by Business Impact NW are done so in a committee-fashion, so there are several sets of eyes on the application, thus eliminating the possibility of a singular loan officer engaging in overt discriminatory practices. Business Impact NW’s “mission loan” allows the CDFI to step out of the rigid credit metrics, use mission terms instead of financial terms, and serve underserved entrepreneurs without working capital. “We provide two to three mission loans a quarter,” reports Nair. If borrowers are able to bring in additional guarantors or partnerships, that is another way the organization is able to circumnavigate the required collateral and credit criteria that are systemically discriminatory.

Business Impact NW also provides coaching and loan readiness training that guides borrowers through the lending process and helps them to better understand the conditions of their loan. The Washington Women’s Business Center is a branch of Business Impact NW committed to serving female entrepreneurs while the Veterans Business Outreach Center works with veterans and their families. While the impact of discriminatory practices are still felt today, a silver lining can be found in the CDFIs that are working to serve those who have been historically disenfranchised.